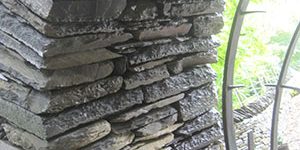 The first half of 2014 has been very eventful, in March I travelled to Edinburgh to attend the Dry Stone Walling Association’s AGM where I was presented with my second full Pinnacle Award for the dry stone walling at Brackenrigg in Cumbria.

This is my second full award, meaning Hugh Drysdale from Scotland and myself are the only two dry stone wallers ever to have been presented with two Pinnacle Awards.

Again in May I travelled south to work at The Chelsea flower show, this now seems to have become an annual pilgrimage having worked their at eight of the last ten years. This year we contributed to three projects, two show gardens one for John Everiss Design and again for a second year running one for Adam Frost, both received Gold medals. The other project was a garden built as a show feature designed by TV gardener Alan Titchmarsh and Kate Gould.

Straight from Chelsea I left for Canada where I worked with my good friend DSWA Master Craftsman Dean Mclellan on a dry stone memorial with a group of his trainees as part of an initiative to provide training in dry stone walling to members of the Canadian first nation people.