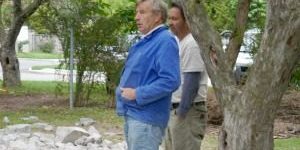 Finally I have got round to addressing the final part of the Dry Stone Walling Association’s Craftsman Certification Scheme, the Master Craftsman timed test. After successfully completing the Master Craftsman features the candidate has a twelve month period in which to complete the timed element of the test.It is worth bearing this in mind when scheduling your test, I would suggest having your features marked in early spring, thus allowing you all summer and autumn in which to attempt the timed element of the test. The candidate is allowed to take the timed test as many times as they like within this twelve month period, although if a candidate is unsuccessful after two or three attempts I would suggest they do not possess the necessary skills to pass a test at this level.

The Master Craftsman timed test involves building five square metres of free standing wall including one of the features listed in the test schedule, this information can be found in the DSWA GB Craftsman Certification Scheme booklet available direct from the DSWA office or online at www.dswa.org.uk. The test must be completed in one continuous seven hour period in front of two DSWA GB examiners. Before embarking on the master craftsman’s test it would be advisable to give some thought as to which feature is going to be selected to be built in the timed test. This feature can then be held back and not built in part A of the test. I always feel that the square corner or step stile are perhaps slightly more straight forward than some of the other features available to build. Having said that I have recently witnessed the square pillar being attempted as the timed element of the master’s test, and if prepared correctly this is a viable option. To attempt the round pillar,the set of steps or the arch would probably be a little over ambitious.

The Master Craftsman test schedule has recently been reviewed and certain changes implemented to the timed element of the test. Problems had been encountered due to candidates pre-building the feature they intended to take down and rebuild for their timed test to such a high standard it was virtually a kit of parts. After various amendments to the test schedule had not solved the problem, it has been decided to remove the stripping out element from the test altogether. Under the new guidelines the selected test piece must be stripped out prior to the test and the stone left in random piles either side of the wall. The candidate may access the available stone to ensure all relevant components for their selected feature are present, but the building stone must remain in random piles. Throughs and top stones may be kept separate as one would find on a work site. This new procedure also allows the candidate a little more building time as no strip out is necessary; during the discussions among the DSWA’s craft skills committee relating to this issue it was agreed that at Master Craftsman level a mark for stripping out was not required. The marks for stripping out have been re-allocated to the building and packing marks for the first and second lifts. The wording relating to the marks for the first and second lifts has also been amended to include selection of suitable stone, it is hoped this will reflect the skill displayed by the candidate in sorting and using the available stone during the test.

Which ever feature is selected for the timed test the candidate must ensure they are familiar with the constructional techniques required and have practiced building the feature prior to the test. The seven hour time limit for the test does not afford the candidate time to contemplate on how to tackle the chosen feature, it must be second nature.It is important the candidate also has all the tools and equipment relevant to the chosen feature, profiles, pins lines etc. On the test day it is advisable that the candidate arrives on the test site in good time to allow time to settle in and calm any test day nerves.

The DSWA Master Craftsman Certificate is the highest qualification attainable in the craft of dry stone walling and the amount of work and quality required to complete this test reflects this. Some individuals have complained that the test is too difficult and unattainable. In defence of the Master Craftsman Certificate I must repeat myself in pointing out that, yes it is difficult, it is not supposed to be easy. Since 2012 four craftsmen have attained the DSWA Master Craftsman Certificate and I am aware that there are three craftsmen half way through the Master’s test procedure having successfully completed their part A of the test. I feel that an average of one or two successful attempts at the masters test each year proves that this level of certification is indeed attainable, although only by the very best craftsmen.