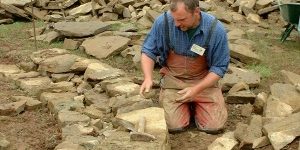 The Dry Stone Walling Association advanced certificate was introduced to bridge the gap between the intermediate certificate and the master craftsman’s certificate. Originally when the scheme was devised the master’s test was taken after the intermediate but as time passed it became apparent that the difference in the skill levels required was too great and so the advanced certificate was developed. Over the next few weeks I will be examining the higher levels of the DSWA Craftsman Certification Scheme and explaining what is expected in these tests, I will not be giving two much away though as the skill and knowledge required at these levels of competence need to be earned and won over many years.

Unlike the initial and intermediate certificates the advanced and  the master craftsman tests differ in the fact that they are both two part tests. Both these tests consist of a part A that must be successfully completed before the candidate can move on to part B. The part A of both these tests comprises of a set of pre built features. For the advanced test the candidate must build five square metres of curved wall and then a further five square metres of wall containing one of the following features.

I will deal with the building of  these features individually before moving on to the part B timed  section of the test next time.

The curved  wall is a compulsory element of part A of the advanced test, the section of wall submitted by the candidate to be marked must be at least five square meters in total area although it can be part of a larger wall. Before starting to build the curve ensure the proposed wall has a sufficient curve for the purpose of the test. The DSWA produces a guidance sheet with the correct method of calculating this curve; you would be well advised to familiarise yourself with these dimensions before commencing with the build. When building a curve I believe the most important thing is to mark out a smooth curve on the ground; the best way to do this is with a can of spray marker paint. Once this is done the foundations can be placed, again this is of great importance for if you set off correctly the rest of the wall should follow along smoothly. If you make an error at this point you will not recover from it and this will be evident in the line of the curve you produce, so take your time and get it right. I firmly believe curves are best built free hand or by eye without the use of string lines, pins or guides. A truly competent craftsman at this level should have the skill and confidence to work by eye. If string lines are employed when building curves the resulting walls are generally faceted like a fifty pence piece due to the string being passed round multiple pins along the length of the wall. At advanced level the craftsman should be developing an instinctive approach to their work; the batter on the wall should be attained naturally as the wall is built, although it is wise to check the width of the wall from time to time so any corrections can be made as necessary. It is best to stand side on to the wall when working, almost leaning into the wall with your leg, this stance will allow you to look along the line of the wall and monitor the curve, it also helps maintain the batter. There is not much more to say about building curves, it’s a knack and practice makes perfect but it is essential to start off well with a good foundation that has a “sweet” curve, after that everything that follows should be easier.

Lunkies are relatively straight forward and a natural progression from the intermediate test, after all they just consist of two small wall heads crossed by a lintel. As with the intermediate test make sure the wall heads are well tied back and secure and make sure the lintels are well placed and overlap into the wall on either side by a reasonable amount, 100mm-150mm (four to six inches} minimum. The lunkie itself must have an opening of 500mm x 500mm ( 20″x 20″ ) minimum and be contained in at least five square metres of free standing wall. Some wallers prefer to build a flag stone into the base of the opening of the lunkie to prevent erosion from animals passing through it, this is perhaps preferable but not actually required as part of the test. Due to the straight forward nature of its construction it is no surprise that the lunkie is the most popular choice of feature in the advanced part A test.

The high wall feature of the advanced test again is quite straight forward, the building technique being identical to a normal height wall. If selected for the test the high wall must be at least  1.8 metres high and again consist of a minimum of 5 square metres of wall although it can be part of a larger wall.The main consideration is obviously to get the width of the wall at the foundation correct in relation to the height. The basic principle of the width of a wall at its base being roughly half its height and then the width of the top of the wall being half the width at the base does not really apply as much when building high walls. A wall with a proposed height of, lets say four metres, would not be two metres wide at its base, you have to be pragmatic and rely on your experience. I personally do not know the ratios of batter for dry stone walls or the mathematical equations to enable me to work them out and, may I add, I do not want to. I have managed thus far without them and will continue to do so. Again I advocate an instinctive or intuitive approach, by the time you are embarking on your advanced certificate one would hope you had reasonable idea of the correct dimensions for the width of a dry stone wall in relation to its height.

The sloping ground feature is probably one of the more difficult features in the advanced part A test and therefore not often attempted. As with all the other features at least 5 square metres must be submitted, although this can be part of a larger wall, and the ground on which the wall is built must have a gradient of at least 20 degrees. I would recommend that at this gradient the foundation trench is dug as a set of steps up the slope and the foundation stone laid accordingly. It is widely recognised that at 15 degrees and below the courses of a dry stone wall should roll with the lay of the land but at 20 degrees slope the coursing should be horizontal.When building up a slope with a stepped foundation always keep your string lines horizontal, it can be confusing but viewed from above your two string lines should taper because at the end nearest the slope the strings will be at the width of the foundations and at the end furthest away from the ground the strings will be at the width of the wall under the copings. By the same rationale viewed from the side each horizontal course will taper. At one end will be a foundation stone and as the course continues out horizontally the stone size will diminish, until at the end the last stone will actually be the top course on the wall. This is probably the single most difficult concept to grasp in dry stone walling and it is far easier to demonstrate  than explain, I apologise if I have left you scratching your head. Try to visualise each horizontal course beginning with a foundation, then each consecutive stone gradually getting thiner until the same course ends with a top stone, that’s the best I can do!

It is important to remember that which ever feature you choose to build, along with the curved wall, that there is no limit on the time allowed to build your features and you are allowed to select and prepare the stone you have available for their construction. With this in mind I think it is fair to say these features are to be built under optimum conditions therefore ensure they are good; treat this as your party piece, this is your time to shine. My advice would be that if you are not happy with a section or element of your features take it down and do it again; why take the risk of failing what is a large financial, physical and emotional commitment. Having said that if you are actually walling at advanced level, six to seven days should be more than ample to complete a set of two features. If it takes much more than this I would be asking myself the question, am I actually ready for this level of test? In my opinion a competent professional dry stone waller would need to work continuously for at least eighteen months after passing their intermediate certificate, before being ready to attempt the advanced test. The level of finish the examiners will expect at this level is much higher than in the previous two certificates, it is best to view the advanced certificate as the level below master craftsman and not one above intermediate.

As a final thought, be prepared, know and understand what is required and be organised. Only build what is required for the test, I have observed candidates building more wall than is required or building unnecessary wall heads on test features. Utilise your time and materials on what is required. Arrange for your features to be marked at a time of year that allows you as much time as possible to schedule your timed test or tests, as you are allowed as many timed tests as you wish within a twelve month period of passing your part A test.  These points aren’t laid out in the test schedule, so you need to be prepared and plan this yourself.

Next time I will deal with the advanced timed test.