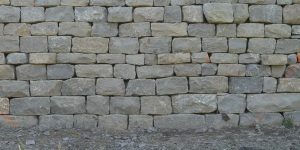 Following my last blog regarding the Dry Stone Walling Association’s Advanced Certificate Part  A, this time I will be dealing with the Part B timed element of the test. As I mentioned previously the DSWA Advanced Certificate comprises of two parts, part A ( pre marked features) which must be successfully completed before part B  ( the timed test ) can be commenced. After completing part A the candidate has one year in which to pass the part B timed test, the candidate can have numerous attempts at the timed test within this twelve month period, although it would be hoped that they would be sufficiently prepared to successfully complete the test in one or two attempts. If after the twelve months have elapsed the candidate has not completed the timed test then unfortunately the features from the part A test are deemed to  have also elapsed and the process must be started again from scratch, if the candidate still wishes to proceed with the test. This may seem harsh but in reality once the features for part A have been successfully marked the timed test is only one day out of  a year and the candidate should be able to organise and factor in one day’s work in a twelve month period, in my eyes this is part of the test although it carries no marks.

When the DSWA advanced test was first introduced the timed element of the test comprised of five square metres of retaining wall, this has since been reduced to four and a half square metres, this is still a large quantity of wall to build in a seven hour period. Technically I believe the intermediate test is a more demanding test than the advanced test, it is just the sheer volume of material involved in a retaining wall that can cause the candidate problems. When stripping out a retaining wall, due to the fact there is only one face to the wall, it will be necessary to place all the building material in one pile, therefore it is essential to be organised. Make sure you have access to all your stone and do not bury key components such as foundation stones, through stones etc. Once the wall is stripped out make sure the earth bank behind the wall is stable, do not dig out too much material from the bank as this will require more stone to replace it. The foundation trench should be clear of debris and prepared as in the earlier tests.

Obviously a retaining wall is all about strength therefore ensure the foundation stones are well laid with plenty of length running into the centre of the wall. There are two methods of constructing dry stone retaining walls, one is to simply build a front face and back fill with rubble to the earth bank and the other is to construct a rough back face to the wall, almost like building a double wall and then back filling behind this structure to the earth bank with rubble. Either of these methods are acceptable, further information and specifications can be found in the DSWA leaflet Specifications for Retaining Walls, this can be downloaded from the DSWA web site. The choice of which method to use is a matter of personal preference but your decision may be influenced by regional style and stone type or quality. Whichever method is chosen it is essential that all the walling stone is laid end in end out and all the filling and packing is placed diligently to ensure the strongest possible construction.

When placing the through stones again ensure they reach as far back in to the body of the wall as possible, preferably the throughs would reach the earth bank behind the wall.Utilise as many throughs as possible and if suitable stones are not available then try to obtain some extras. For higher retaining walls you will also need to take into account how many rows of throughs will be necessary for the height

. The line and batter on a retaining wall are considered of great importance in the advanced test. The line when viewed along the face of the wall should be straight and free from hollows and bulges, this is attained by working to your string lines, this is a technique you should have mastered in the earlier tests and should be second nature by now. The batter can prove to be more contentious, some DSWA examiners have expressed the opinion that if the timed test is to be carried out on an existing wall with very little batter the new section of wall should be built with greater batter. This new section of wall with more batter will obviously stick out from the face of the existing wall. I completely disagree with this school of thought, I believe the new section of wall has to join in to the existing wall smoothly even if there is not much batter. Obviously if the existing wall was overhanging or un-sound it should be dismantled and rebuilt, but if it is sound the new section of wall should  merge seamlessly with the original. If during a test situation you find yourself in this position I would recommend that you explain to the examiners that in reality if you were constructing a brand new wall you would prefer to introduce a larger batter to the wall but in this instance you are matching the original structure.

The coping stones should be laid with the best face forward, being a retaining wall the back of the coping will not be seen unless the wall is higher than the actual banking it retains, in this instance a section of free standing wall would be built on top of the retaining section of the wall. When considering the advanced timed test bear in mind the test schedule requires the wall to retain at least 1.2 metres of earth bank, measured from the base of the foundation trench.  The wall must retain the bank to the top of the wall under the copings.

Remember that the examiners will be looking for a solid construction with a high level of finish that would be expected at this high level of certification. As I have mentioned before it is wise to look at the Advanced test as the test below Master Craftsman level rather than the test above intermediate.

Next time I will deal with the Master Craftsman test, again I will split it in to two halves analysing the part A of the test first. As with the advanced test this comprises of building several features which are marked prior to the timed test taking place.