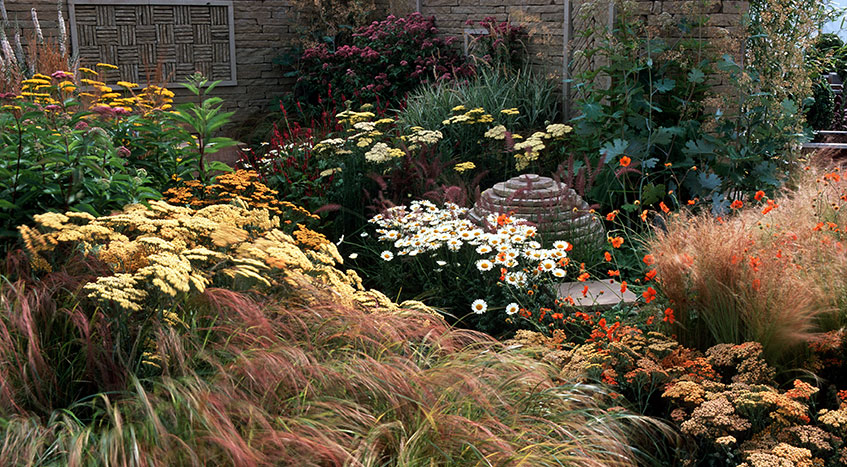 Alongside the above awards which have been presented directly to Andrew for his work and designs, he has contributed and collaborated on many other prestigious and award winning schemes.

Soon after attaining Master Craftsman status with The Dry Stone Walling Association of Great Britain Andrew, in the year 2000, was invited to work as part of a team of UK wallers alongside the artist Andy Goldsworthy. They travelled to the USA to construct an installation at the Des Moines Art Centre. Andrew also worked alongside Goldsworthy and his lead waller Steve Allen on elements of The Cumbrian Sheepfolds Project. Around this time Andrew also travelled to Brussels to work on an installation with Belgian artist Bob Verschueren. Andrew has since worked on many other artistic projects and installations at locations such as Grizedale Forest Sculpture Park, The Royal Academy of Art, The South Bank Centre and The Victoria and Albert Museum.

Andrew has worked at all the major Royal Horticultural Society flower shows, both as an exhibitor in his own right and as a specialist contractor for some of the most respected names in garden design including Adam Frost, Nigel Dunnett, Christopher Bradley Hole and Arne Maynard. In 2007 Andrew worked for the BBC in producing the Gardeners’ World 40th Anniversary Garden designed by Joe Swift at Gardeners’ World Live at the National Exhibition Centre, Birmingham.

In 2006 Andrew was engaged by a film production company to construct dry stone walls and advise on aspects of dry stone walling to the Hollywood movie Miss Potter starring Rene Zelweger and Ewan Mcgregor. During this time Andrew built walls as part of the set and advised on dry stone walling techniques to members of the cast required to be filmed walling.

In addition to his commercial walling activities Andrew is also heavily involved with the Dry Stone Walling Association, a UK based charity responsible for promoting the craft of dry stone walling through public awareness and education. Andrew is a longstanding trustee of the association and a past National Deputy Chairman, he is currently the DSWA GB Chief Examiner and Craft Skills Co-ordinator. In these roles Andrew has travelled extensively in Europe and North America promoting the craft of dry stone walling through training and education.