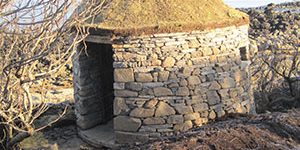 Three months of 2013 were spent on the Isle of Skye in Scotland constructing an impressive dry stone sanctuary on a beach. Probably the most complex structure Andrew has ever been asked to build using dry stone walling techniques.

Further to the Isle of Skye project work on a private garden in Cumbria is drawing to a close after two year’s work and over one thousand tons of stone. Andrew also attended Chelsea Flower Show again contributing to designer Adam Frost’s garden.